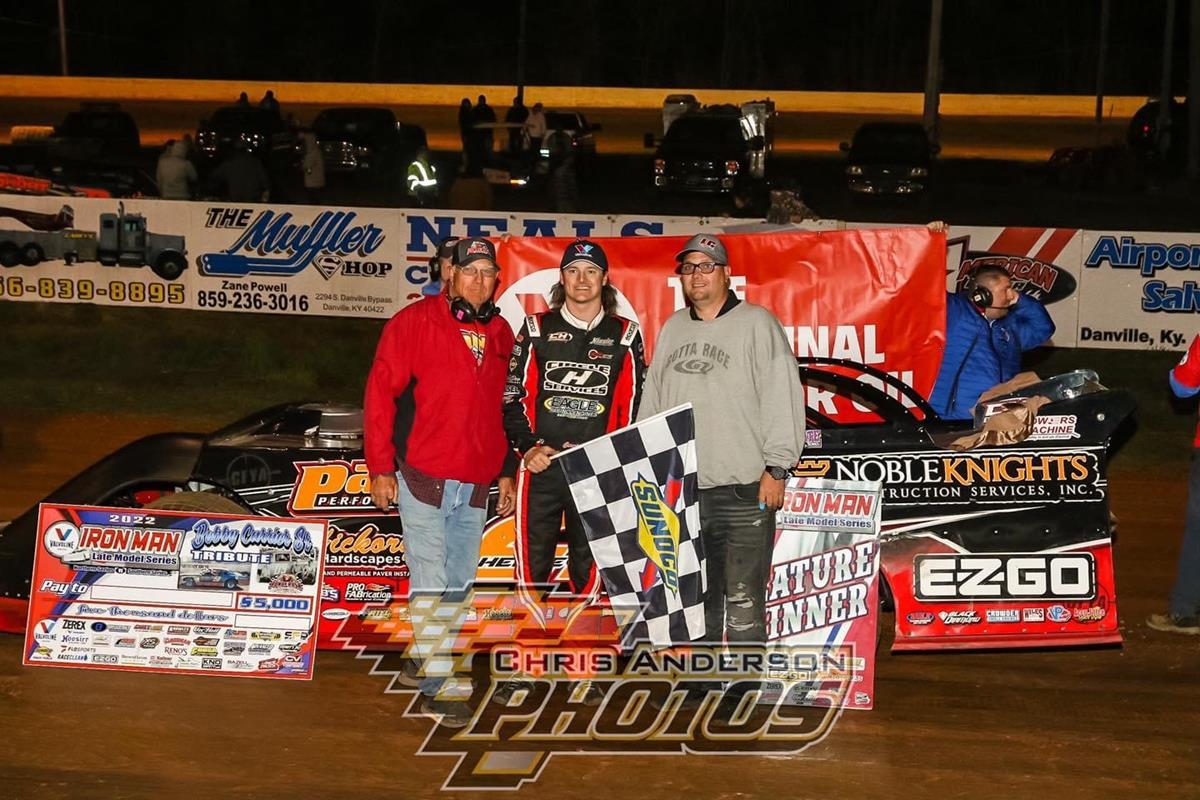 JUNCTION CITY, KENTUCKY (April 15, 2022)– The Valvoline Iron-Man Late Model Northern and Southern Series would sanction the Bobby Carrier, Sr. Tribute at Ponderosa Speedway in Junction City, KY on Friday evening and Cory Hedgecock of Loudon, TN would lead all 40 laps on his way to a $5,200 payday.

Cory Hedgecock would take the lead from his inside pole starting position of the Bobby Carrier, Sr. Tribute event, followed by Spencer Hughes, Tyler Erb, Josh Rice, and Garrett Smith. Zack Dohm would take fifth from Smith on lap two, while Rice would snag third from Erb on lap three. Hedgecock would build a comfortable lead at this point, while Dohm would challenge Erb and take the fourth position on lap six. Hughes would almost spin out in turn four on lap seven, allowing Rice, Dohm, Erb, and Dustin Linville to get by him. The first caution of the race waved on lap thirteen for debris on the frontchute. The restart would not see a lap made as Garrett Alberson would clip a tire barrier on the inside of turn two as would roll to a stop in turn three to draw the caution, done for the night. The resulting restart would keep Hedgecock out front, followed now by Dohm, Rice, Erb, and Eli Beets. Only one more circuit would be make though as Dustin Linville would end up around in turn four and his night would be finished. The top five remained the same on the restart, while Michael Chilton would jump to the top side of the track and make his way to fifth on lap sixteen. Hedgecock would again build a comfortable lead, while Chilton would run down fourth place Erb and take the position on lap nineteen, while Tanner English would make his way into the top five after getting around Erb one circuit later. Hedgecock would keep Dohm at bay for the time being as the final caution of the event flew on lap thirty when Pierce McCarter would make contact with the outside retaining wall in turn one and leave debris on the race surface. Hedgecock would again hold the lead on the restart, with Dohm and Rice mixing it up for second, while English would take fourth away from Chilton. Dohm would finally secure the runner-up slot on lap thirty-two, but could not make any gains on the leader. English would begin to challenge Rice for the third spot and would take the position on lap thirty-eight. Hedgecock would drive under the checkered flag first, followed by Dohm and English, with Rice finishing fourth, while Christian Hanger would nip Chilton at the line for fifth. Chilton would come home sixth, with 18th place starting Brandon Sheppard, Erb, Camaron Marlar, and 17th place starter Daulton Wilson completing the top ten.

The next event for the Valvoline Iron-Man Late Model Southern Series will be on Saturday April 16 at Tazewell Speedway in Tazewell, TN for the Lil’ Bill Corum Memorial, paying $21,000 to win (this event will be co-sanctioned with the Schaeffer’s Oil Spring Nationals).