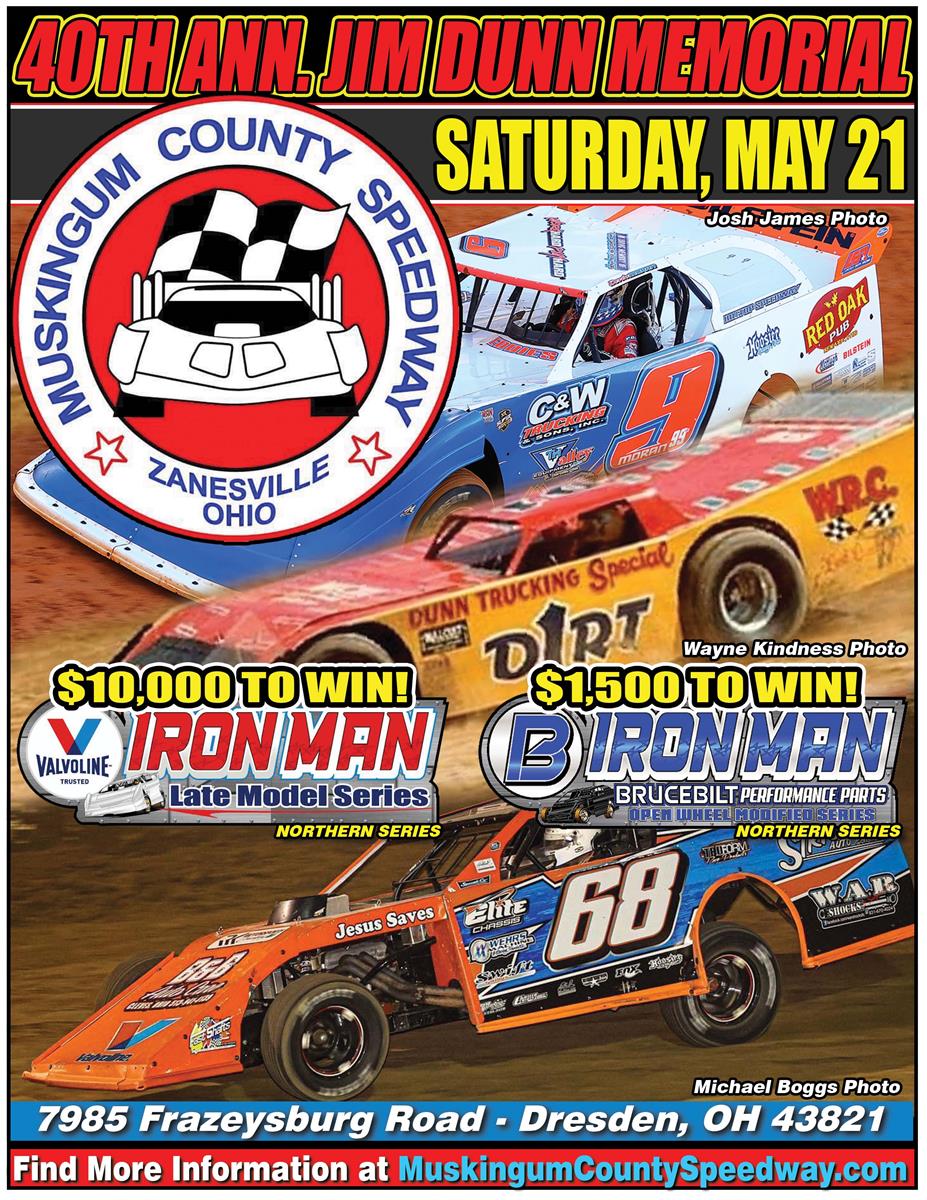 SOMERSET, KENTUCKY (May 17, 2022) – The Valvoline Iron-Man Racing Northern Series will be back in action on Saturday May 21 at Muskingum County Speedway in Zanesville, OH for the 40th edition of the Jim Dunn Memorial, paying $10,000 to win and $500 to start. The Brucebilt Performance Parts Iron-Man Open Wheel Modified Northern Series will also be in competition in their first official event of the season on Saturday May 21, racing for $1,500 to win and $150 to start.

The Valvoline Iron-Man Late Model Series will sanction the Super Late Model portion of the event on Saturday May 21 and the tire rule will be as follows: Hoosier 1300 anywhere on the car, 1425 as a right-rear option (if the series needs to do a tire rule limiting the number of tires per night it will, but as of now the series will not be limiting the number of tires for either series; NO 29.0 size tires on the left rear; the droop rule will be in effect, along with the new standardized 2022 body rules). The entry fee will be $100 and transponders for timing/scoring will be available for rent at the track. Any driver not making the 22-car starting field will receive $75 tow money.

The Brucebilt Performance Parts Iron-Man Open Wheel Modified Series will sanction the Open Wheel Modified portion of the program both nights and the tire rule will be as follows: Hoosier M30s, M60 (right-rear option only) (grooving and siping of tires are allowed per UMP rulebook; UMP 2022 body rules apply; no limit of tires used per night). The entry fee will be $10 for series members and $20 for non-series members. Memberships are available at the track for $50.00 per season. Transponders for timing/scoring purposes will be available for rent at the track. Any driver not making the 22-car starting field at each event will receive $30 tow money.

The Jim Dunn Memorial is contested in memory of the late Jim Dunn, who lost his life in a tragic racing accident at a NDRA race at Paducah International Raceway on May 8, 1993. Calling Roseville, OH home and a teacher by trade, Dunn would be thrust onto the national scene in October 1981 when he scored the victory in the inaugural Dirt Track World Championship at Pennsboro Speedway in Pennsboro, WV, that at the time paid an unprecedented $30,000 top prize. In what is considered one of the ultimate underdog stories of all time, Dunn was set to load and head home and bypass his B-Main after his car was damaged in a heat race incident, but his hauler would not start, so his team unloaded the race car and got it prepared for the B-Main and he would transfer to the main event from his B-main and start 23rd in the field and would work his way through the field and take the lead from Rodney Combs on lap eighty-eight and the rest was history and the legend of Jim Dunn was born. Dunn would capture the six career All Star Circuit of Champion Late Model Series victories, including the series championship in 1980 and 1982, along with two career wins with the Midwest Outlaw Super Series and the 1980 series title, along with numerous victories at many other tracks. Dunn was very likable and highly respected by his fellow racers and was an inductee into the initial National Dirt Late Model Hall of Fame class in 2001.