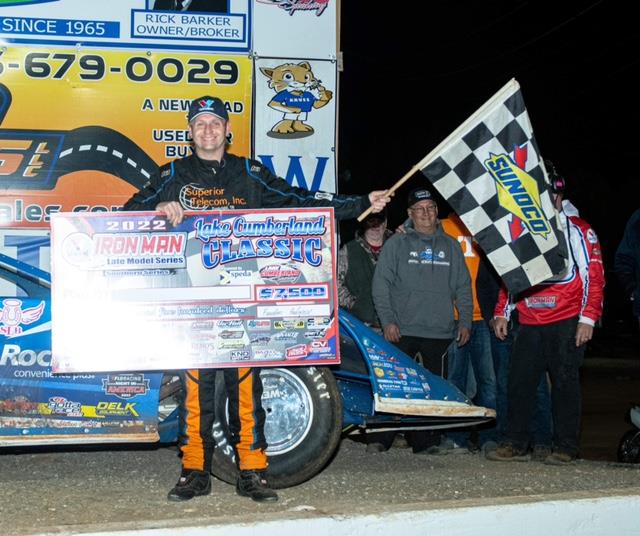 BURNSIDE, KENTUCKY (October 8, 2022)– The Valvoline Iron-Man Late Model Southern Series would make its final visit of the 2022 racing season to Lake Cumberland Speedway in Burnside, KY for the 27th Annual Lake Cumberland Classic presented by SPEDA (Somerset-Pulask Economic Development Authority) with $7,500 going to the winner and Mike Marlar of Winfield, TN would lead all forty laps and capture the victory.

The first attempted start would not see a lap completed as Austin Atkins and Nick Pennington would tangle exiting turn four, with Pennington’s entry done for the event. The second attempted start of the race would be a go and Mike Marlar would take the race lead, followed by brother Camaron Marlar, Michael Chilton, Justin Rattliff, and Jesse Lay. Mike Marlar would set a rapid pace up front as the front five would remain the same as Mike Marlar began lapping slower cars on lap nine. By lap eleven, Mike Marlar would be in heavy traffic, allowing Camaron Marlar to reel in the leader at this point, while Chilton challenged Camaron Marlar for second in lapped traffic. The race would reach the halfway mark at lap twenty only to see the caution wave one circuit later on lap twenty-one for the slowed machine of Adam Ahl in turn one, who would be finished for the night. Mike Marlar would control the restart, followed by Camaron Marlar, Chilton, Rattliff, and Jesse Lay. Mike Marlar would again pull away from the pack and begin to work slower traffic once again by lap twenty-nine. The lead trio would be in heavy traffic at this point and Chilton would challenge Camaron Marlar for second and would make a pass for the spot, only to see it negated as the final caution of the race waved on lap thirty-two for debris on the track in turn two. The final restart would see Mike Marlar once again scoot away from the field and catch slower traffic with two laps remaining but would not be deterred as Mike Marlar would take the victory, with Camaron Marlar, Michael Chilton, Justin Rattliff, and Jesse Lay completing the top five finishers. The remainder of the top ten would be Donald McIntosh, Austin Lay, Joe Denby, Austin Atkins, and Charlie Jude.