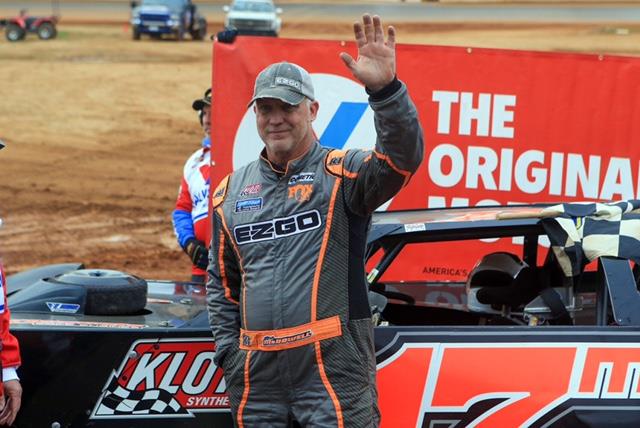 RINGGOLD, GEORGIA (November 19, 2022)– The Valvoline Iron-Man Late Model Southern Series would return to action on Saturday at Boyd’s Speedway in Ringgold, GA for the 34th Annual Gobbler and Dale McDowell of Chickamauga, GA would put his name in the record book and he became the first five-time winner of the Gobbler event as he would lead all forty laps on his way to a $10,000 payday.

For the 56-year-old McDowell, it would be his Valvoline Iron-Man Late Model Series victory of the season and his third career Valvoline Iron-Man Late Model Series victory behind the wheel of a Team Zero Race Car powered by a Clements Race Engines with sponsorship from E-Z-GO, Connected Strategy Advisors, North Eastern Fabrication, Campbell Insulation Specialists, Klotz Lubricants, Cometic Gasket, and FOX Shocks.

McDowell would take the lead at the start of the event from his outside front-row starting spot, with polesitter Michael Chilton, Mack McCarter, Sam Seawright, and Ray Cook giving chase. McCarter would snag the runner-up spot from Chilton on lap two, while McDowell would immediately open a sizable lead. By lap eight, McDowell would hold a 2.5 second lead and would start working lapping slower traffic on lap ten. The first caution of the race waved for a spin in turn two by Will Roland on lap twelve. McDowell controlled the field on the restart, with Chilton reclaiming second from McCarter, with Seawright fourth, while ninth-place starter Cory Hedgecock would claim the fifth position from Cook. McCarter would again take the second position away from Chilton on lap thirteen, while Hedgecock would work past Seawright for fourth one circuit later. While McDowell would again open his lead back up to 2.5 seconds over McCarter, Hedgecock would continue his mid-race charge as he would claim the third position over Chilton on lap eighteen. McDowell would begin to work lap slower traffic once again by lap twenty-two and would encounter heavy traffic by lap twenty-five, allowing McCarter to close in on the leader, while Hedgecock would close in on McCarter for second. Thirteenth place starter Michael Page would make his way into the top five on lap twenty-nine when he would drive past Seawright, while Hedgecock challenged McCarter for second and would momentarily have the spot, only to see the caution flag wave to negate his pass on lap thirty-one for the slowed machine of Josh Walker on the backchute. The final restart would see McDowell maintain the race lead, with McCarter and Hedgecock resuming their battle for second, while Page would pressure Chilton for fourth. McCarter would finally pull away a bit from Hedgecock by lap thirty-five, while Page took the fourth position from Chilton on the same circuit. McDowell would not be challenged in the waning laps and take the checkered by 2.424 seconds over McCarter, while Hedgecock would settle for third. Page and Chilton would complete the top five. The remainder of the top ten would be Cameron Weaver, Seawright, Ross Bailes, Cook, and Tod Hernandez.

The next event for the Valvoline Iron-Man Late Model Southern Series will be at 411 Motor Speedway in Seymour, TN on Saturday November 26 for the 7th Annual Leftover event, paying $5,000 to win and $450 to start. The Brucebilt Performance Parts Iron-Man Open Wheel Modified Southern Series will also be in competition at 411 Motor Speedway on November 26, racing for $1,500 to win and $150 to start. This will be the 2022 series finale for both tours.