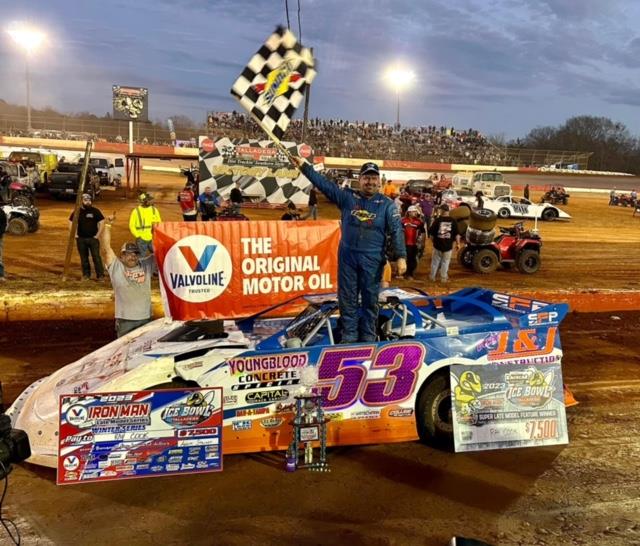 EASTABOGA, ALABAMA (January 6-7, 2023)– The Valvoline Iron-Man Late Model Southern Series presented the first race of the Valvoline Iron-Man Late Model Winter Series with the 32nd Annual Ice Bowl presented by Racecar Engineering and Ray Cook of Brasstown, NC would survive an early race tangle and work his way back through the field and also survive a rash of late race cautions for flat tires to claim his third Ice Bowl victory (previous wins came in 2009 and 2012) and the $7,500 payday.

Pearson Lee Williams and Sam Seawright would bring the field to the green flag, but the caution would wave in turn one before a lap would be completed for a multi-car incident that eliminate Jordy Nipper from action. The second attempted start would be a go, with Sam Seawright taking the lead, followed by J.T. Seawright, Dallas Cooper, Pearson Lee Williams, and Dalton Cook. Jason Hiett and Will Roland would tangle in turn one on lap two to draw the next caution and Mark Bangs and Will Harris would tangle in turn four on the restart. The next restart would see sixth-place running Chase Oliver clip an infield uke tire entering turn three, collecting Ray Cook in the process and drawing the caution. Sam Seawright would control the lead again on the restart, followed by J.T. Seawright, Cooper, and Williams, while Dalton Cook and Booger Brooks would trade the fifth position until Brooks won the battle for the spot on lap six. The front five would remain the same until caution waved again on lap twelve for Mark Bangs after he made contact with the end of the frontstretch wall entering turn one. The restart would also be a no-go when Dalton Cook would slow in turn two with a flat right-front tire. The restart would see Sam Seawright, J.T. Seawright, Cooper, Williams, and Brooks hold down the top five spots, while Ray Cook and Will Roland began to march their way back toward the front of the field. David Seibers would draw the next caution on lap twenty when he would slow in turn three. The front five would again remain the same until Roland would slow in turn two with a flat right rear tire and under this caution, second place running J.T. Seawright would stop on the track and be pushed off the track with mechanical issues. This restart would not see a lap completed as Randy Holder went over the back in turn one to keep the field under caution. Sam Seawright would maintain the lead on the restart, with Brooks climbing to second, trailed by Cooper, Williams, and Chris Jones. The next caution waved on lap thirty-five when Cooper would slow in turn two and see his night finished at this point. Seawright would be challenged by Brooks on the restart, with Williams now third, and Ray Cook would work past Jones for the fourth position. Lap thirty-seven would see Todd Morrow slow in turn four and when action resumed, disaster would strike for Williams as he would tangle in turn four on the restart and his night would be done. Seawright again held off Brooks on the restart, while Ray Cook would now be third, followed by Jones and Roland. Dalton Cook would draw the next caution on lap thirty-eight. The top five remained the same on the restart until the caution waved again on lap forty for sixth place running Scott Crigler, who slowed in turn one with a flat right rear tire. Seawright maintained the lead once again, while Ray Cook would drive past Brooks for the second position, followed by Jones and Roland. Disaster would strike Seawright on lap forty-three when his mount would slow down the backchute with a flat right rear tire. This turn of events would hand the lead to Ray Cook on the restart, who would be trailed by Brooks, Jones, Roland, and Morrow. The final caution of the race waved on lap forty-four for second place running Brooks, who would suffer a flat right rear tire. Cook would lead the way the remainder of the way and score the victory, followed by Jones, Roland, Morrow, and Crigler. The remainder of the top ten finishers would be Seawright, Brooks, Will Harris, Dalton Cook, and Williams.

The next event for the Valvoline Iron-Man Late Model Series will be race number two of the Winter Series and will take place at Boyd’s Speedway in Ringgold, GA on Saturday January 28 for the 15th Annual Cabin Fever 40, paying $5,000 to win.

About Valvoline™
Valvoline Inc. (NYSE: VVV) is a leading worldwide marketer and supplier of premium branded lubricants and automotive services, with sales in more than 140 countries. Established in 1866, the company’s heritage spans more than 150 years, during which time it has developed powerful brand recognition across multiple product and service channels. Valvoline ranks as the No. 3 passenger car motor oil brand in the DIY market by volume. It operates and franchises approximately 1,400 quick-lube locations, and it is the No. 2 chain by number of stores in the United States under the Valvoline Instant Oil ChangeSM brand and the No. 3 chain by number of stores in Canada under the Valvoline Great Canadian Oil Change brand. It also markets Valvoline lubricants and automotive chemicals, including the Valvoline High Mileage with MaxLife technology motor oil for engines over 75,000 miles; Valvoline Advanced Full Synthetic motor oil; Valvoline Premium Blue™ heavy-duty motor oil; Valvoline Multi-Vehicle Automatic Transmission Fluid; and Zerex™ antifreeze. To learn more, visit www.valvoline.com.