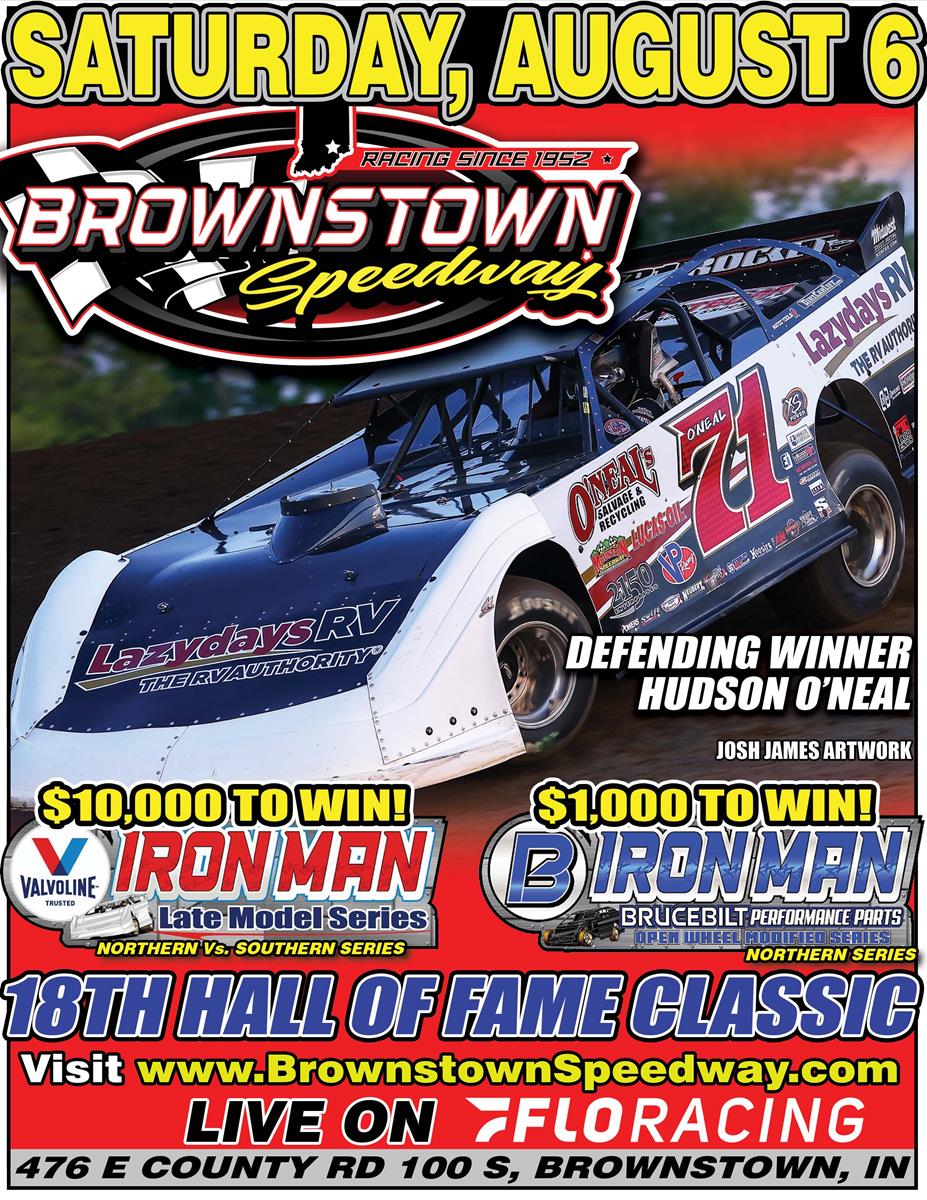 SOMERSET, KENTUCKY (August 4, 2022) – The Valvoline Iron-Man Racing Northern and Southern Series will visit Brownstown Speedway in Brownstown, IN on Saturday August 6 for the track’s 18th Annual Hall of Fame Classic, paying $10,000 to win and $500 to start for Super Late Models, while the Brucebilt Performance Parts Iron-Man Open Wheel Modified (UMP) Northern Series will also be in competition at Brownstown Speedway’s Hall of Fame Classic, racing for $1,000 to win and $100 to start.

The Valvoline Iron-Man Late Model Series will sanction the Super Late Model portion of the event and the tire rule will be as follows: Hoosier 1350 anywhere on the car, LM40 as a right-rear option; American Racer 48 anywhere on the car, 56 as a right-rear option (if the series needs to do a tire rule limiting the number of tires per night it will, but as of now the series will not be limiting the number of tires for the series; NO 29.0 size tires on the left rear; the droop rule will be in effect, along with the new standardized 2022 body rules). The entry fee will be $100 and transponders for timing/scoring will be available for rent at the track. Any driver not making the 22-car starting field will receive $75 tow money.

The Brucebilt Performance Parts Iron-Man Open Wheel Modified (UMP) Northern Series will sanction the Open Wheel Modified portion of the program and the tire rule will be as follows: Hoosier M30s, M60 (right-rear option only) (grooving and siping of tires are allowed per UMP rulebook; UMP 2022 body rules apply; no limit of tires used per night). The entry fee will be $10 and transponders for timing/scoring purposes will be available for rent at the track. Any driver not making the 22-car starting field at each event will receive $30 tow money.

Brownstown Speedway is located one mile southeast of Brownstown, IN on State Road 250 at the Jackson County Fairgrounds. For more information about Brownstown Speedway, phone the track at (812) 358-5332 or visiting the track’s website at www.brownstownspeedway.com