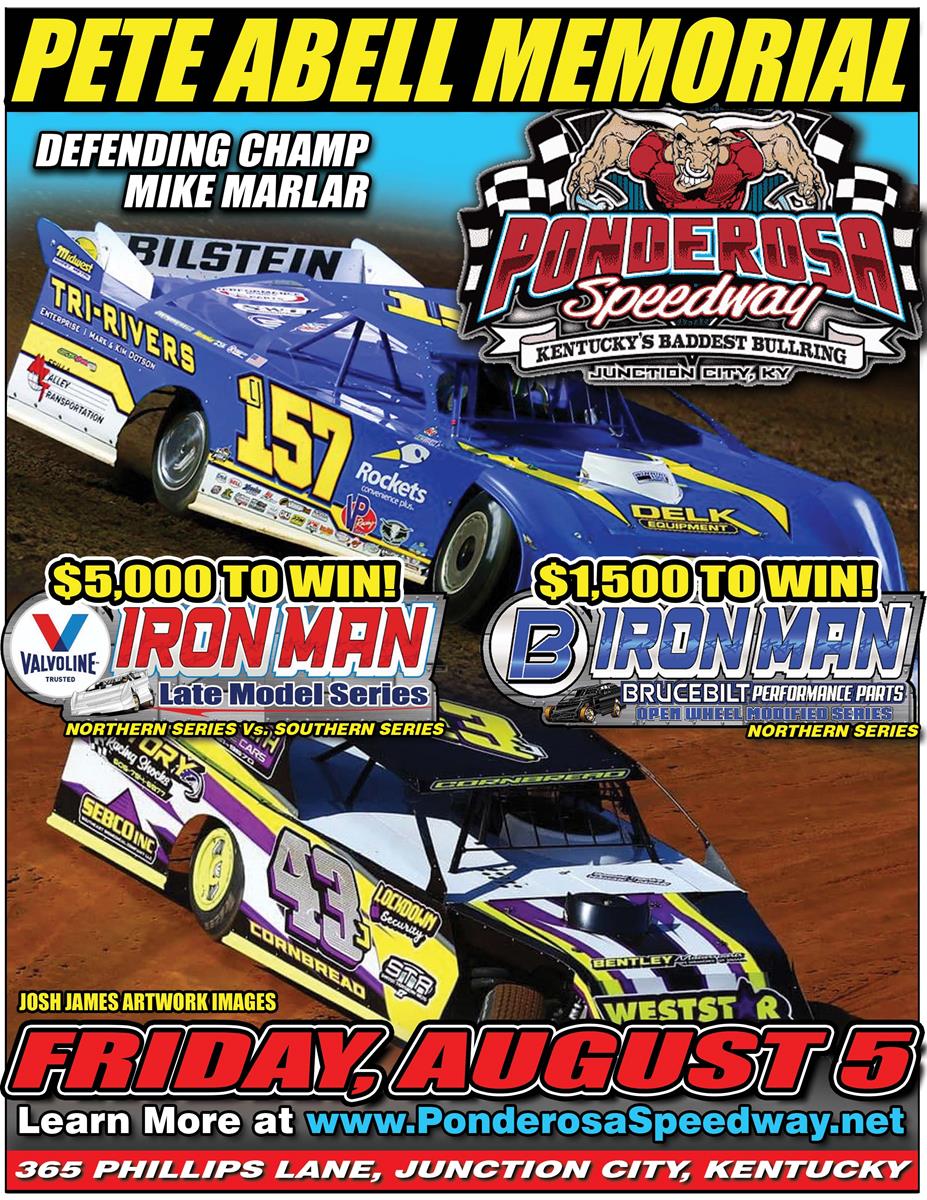 Activities will see the pit area and general admission area open at 2:00 p.m. The drivers meeting will be at 7:00 p.m., with practice laps and time trials beginning at 7:20 p.m. Ticket prices at Ponderosa Speedway for the 24th Annual Pete Abell Memorial on Friday August 5 in the general admission area will be $25 for adults (children ages 10 and under are free), while a pit pass will be $40 for adults.

The Valvoline Iron-Man Late Model Northern and Southern Series will sanction the Super Late Model portion of the event and the tire rule will be as follows: Hoosier 1350, 1600, LM40 (Crate 21 and 55 also are fine) or American Racer 48 and 56 (if the series needs to do a tire rule limiting the number of tires per night it will, but as of now the series will not be limiting the number of tires for either series; NO 29.0 size tires on the left rear; the droop rule will be in effect, along with the new standardized 2022 body rules). The entry fee will be $100 and transponders for timing/scoring will be available for rent at the track. Any driver not making the 22-car starting field will receive $50 tow money.

The Brucebilt Performance Parts Iron-Man Open Wheel Modified Southern Series will sanction the Open Wheel Modified portion of the Area 51 program and the tire rule will be as follows: Hoosier M30s, M60, Medium, Hard; American Racer Hard and Extra Hard (only Hoosier M60, Hard, and American Racer Extra Hard are allowed as right-rear tire options; grooving and siping of tires are allowed per UMP rulebook; UMP 2022 body rules apply; no limit of tires used per night). The entry fee will be $40 and transponders for timing/scoring will be available for rent at the track. Any driver not making the 22-car starting field will receive $30 tow money.

Ponderosa Speedway in located at 365 Phillips Lane just outside of Junction City, KY 40440. For more information about Ponderosa Speedway, visit the track’s webpage at www.ponderosaspeedway.net.